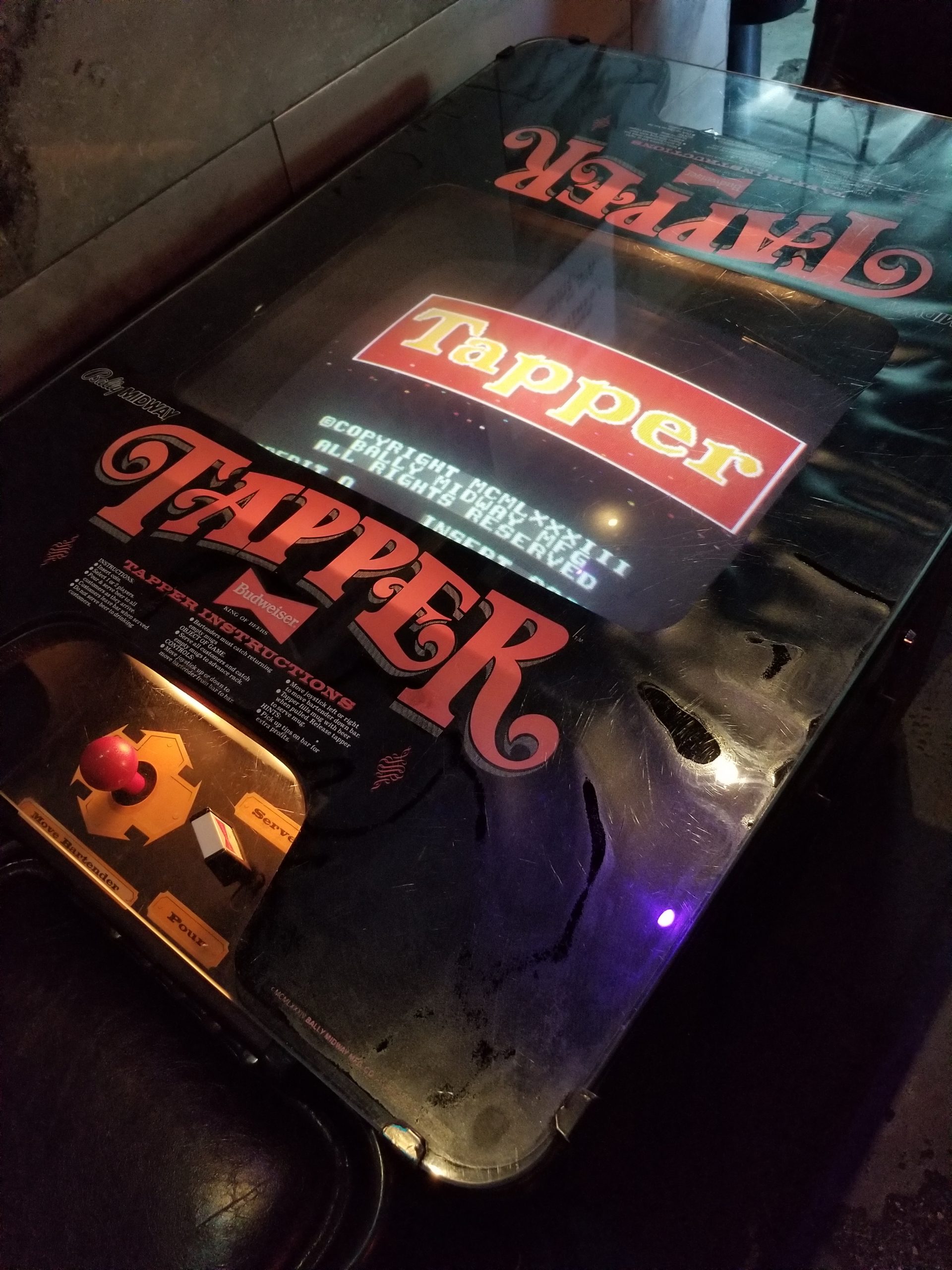 Tapper is a 1983 arcade game released by Bally Midway. Tapper puts the player in the shoes of a bartender who must serve eager, thirsty patrons before their patience expires while collecting empty mugs and tips.

We have the sit down version of the game.

Originally sponsored by Anheuser-Busch, the arcade version features a Budweiser motif. It was intended to be sold to bars, with cabinets sporting a brass rail footrest and drink holders. Early machines had game controllers that were actual Budweiser beer tap handles, which were later replaced by smaller, plastic versions with the Budweiser logo on them.

The Tapper game screen features four bars. Patrons arrive periodically at the end of the bar opposite the player and demand drinks. The player must draw and serve drinks to the patrons as they slowly advance towards the player. If any customers reach the player’s end of the bar, they impatiently grab the player-as-bartender and toss him out the far end of the bar, costing the player a life.[6]

The player serves customers by filling a mug at one of the four taps. Once the mug is full, the player releases the tap which automatically slides the mug towards the advancing customer. Customers catch mugs that are slid towards them, as long as they are not already drinking a beer, or otherwise distracted. If a mug is not caught by a customer (whether the customer is already drinking or distracted, or if there is no customer), then it falls off the bar on the other end, resulting in a loss of a life for the player. If a customer does catch the mug, though, then he or she is pushed back some amount towards the opposite end of the screen. The goal is to push the customer completely off the screen, but if they are not then they will stay and consume their drink in place. When a customer finishes his drink, he slides the empty mug back towards the player, after which the customer resumes his advance on the player. The player must collect the empty mugs before they reach the end of the bar and fall to the ground, as a mug falling to the ground costs a life.

Periodically, customers will leave tips on the bar for the player. These tips can be left at any place on the bar. The tip will appear after a specific number of empty mugs are released by the customers, and will appear wherever the customer who releases the required mug is standing. For example, in all levels, the first tip is left by the customer who returns the second empty mug, and will be left beside wherever this customer is standing. By collecting the tip, the player earns extra points and initiates “entertainment” for that level (dancing girls on the wild-west level, cheerleaders on the sports level, etc.). While the entertainment is active, some fraction of the customers will be distracted and stop advancing towards the player, but they will also stop catching mugs.

To complete a level the player must clear the entire bar of customers. Once this is done, the player is presented with a short vignette in which the bartender draws a drink for himself, drinks it, then tosses the empty mug into the air with varying (usually humorous) results, such as kicking it and shattering it or having the mug fall atop his head and cover it.

As the game progresses, the customers appear more frequently, move faster along the bar, and are pushed back shorter distances when they catch their drinks. In addition, the maximum number of customers per bar gradually increases until every bar can have up to four customers at a time.

In between levels of different settings, the player is presented with a “challenge” round. In this segue, the player is presented with a single bar that has six cans of beer or root beer sitting on top of it. A masked villain shakes every can except one and then pounds on the bar, causing the cans to shuffle their positions. It is in essence a shell game. If any other shaken can is picked, it explodes in the bartender/soda jerk’s face, after which the right can is revealed. If the player selects the unshaken can, the hero is shown smiling and a message reads “This Bud’s For You” (on the Budweiser version) or “This one’s for you” (on Root Beer Tapper), and the player is rewarded with extra points.

There are four settings for the game, each setting lasting for two to four levels. The settings of the game are:

After completing all the levels, 13 in all, the player starts at the first again, harder than the first time through, and with some minor variations. 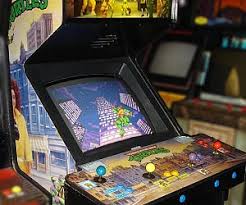 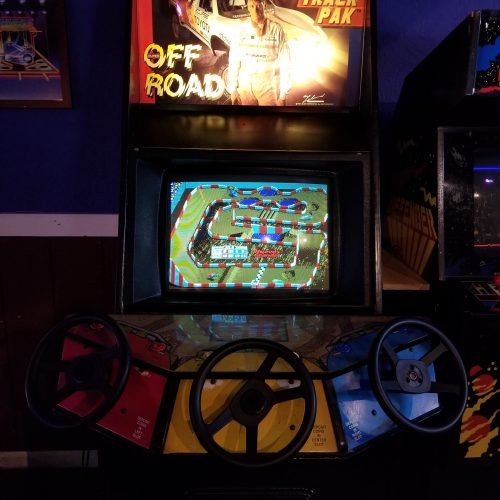