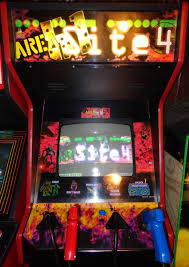 The game is broken down into two big menus: field exercise and adventure. Field Exercise is the main mode of the game. The training levels are based on brief missions where the player must complete all “training challenges” and the “real mission” (in either order). Completing all the training challenges will involve shooting zombies that are contained in the labs, shooting giant maggots trying to burrow into sick patients in an infirmary, protecting a bus from aliens trying to roll it over, and destroying alien ships, turrets, and missiles. In the final mission, the player must go into a huge warehouse to destroy a giant red alien with multiple limbs, shooting zombies and aliens. The player will lose a life if hit by an enemy, shooting a S.T.A.A.R. team member, failing to complete a quota or letting the bus tip over where the player must protect it.